Carlos learned about LCH about three years ago from some of the staff that would come to his restaurant during their lunch break. One day, he asked them what the LCH logo on their scrubs stood for. Yari, one of the Medical Assistants, said that LCH is a medical center with other services for the community. Then he got curious. He asked if they could help him find a place to get help with bloodwork. He told them that he has a Thyroid problem and he needs to get blood drawn regularly.

Having just left his corporate job that had health insurance to open his own business, bloodwork without health insurance cost him $400. Yari encouraged him to check out LCH. She told him that through LCH’s sliding fee scale for patients without insurance, his bloodwork could cost him as little as $10 if he came to LCH for care. So he decided to check it out.
“I could not believe it! I went to LCH and did all the paperwork. I saw Dr. Ceppa, who was fantastic, and the bloodwork turned out to be $10 based on my salary and family size at the time. It was awesome. It was such a huge help when I really needed and it when I was just starting out. Even though I have health insurance, I still go! They take really good care of you.” 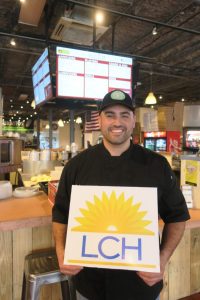 Carlos is originally from the West Chester area. He has spent his career in the food industry. From McDonalds to pizza shops, Wawa to breakfast hang outs, delis to restaurants, he has always had the dream of opening his own restaurant. His dream came true when he and his girlfriend (now wife) moved to South Korea during the housing crisis. They had always wanted to live abroad, and they decided that this was the right time to move. She taught English at a local school and he started a mobile eatery, Kabo Burritos. When they came back to the United, Kabo Burritos opened in the Market at Liberty Square in Kennett Square, PA in 2016 and Rump Roasters also in the market in June 2018. He hopes to continue to open new food businesses in the southern Chester County community in the coming years.

Carlos lives in West Chester with his wife and three boys: a four and a half year old, an 18 month old, and a newborn baby. “I am truly blessed. I have a great team, and great people. LCH has been an absolute blessing to my family. I cannot say enough about LCH.”